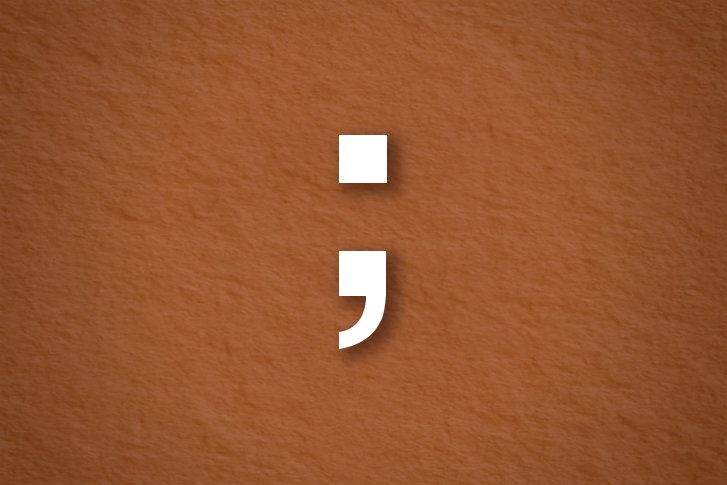 Imagine your books filled with sentences like the above?

That’s how the early Greeks read their texts.

For every next sentence, you understand, thank the ancient Egyptian librarian, ‘Aristophanes,’ who got fed up with this format and introduced dots to break the text.

So meet, ‘Point in the top’ – (·), our earliest ancestor of the semicolon.

Then there is punctus versus

, the earliest punctuation which resembled the modern day semi-colon.

Since then, our semicolon has had an eventful history, with professors drawing swords and slashing arms to defend it, and famous authors mocking it:

Some American presidents have even sung its praises:

However, at present, it’s a highly misused and unused punctuation mark, with very few people knowing its right use.

If you aren’t among them, below are the major semicolon rules which should be used to craft clear and well-spaced sentences.

If nothing else, the right use will be an honor for this time-tested punctuation with such a vibrant and brutal history.

How does it look?

Like this (;)… a comma with a period/full-stop above it.

How does it act?

A semicolon acts in an intermediate style between that of a comma and a period.

A semicolon creates a greater separation between sentences more than achieved by a comma, but less than a period.

Use a semicolon for further separating items in a list, when commas already separate a few of those.

For instance, you need to list the following items that you bought from the stationery shop:

For listing them in a sentence, you would separate them using commas.

Example: I bought pens, pencils, and a notebook

Consider a case when the stationary items are present in phrases separated by commas:

If commas are used for further separating these sentences, it will look like

Isn’t the above sentence confusing?

Is it able to create the right picture as to how many items you bought, or which items are in one group?

By replacing the comma with semicolons, it becomes easier to tell how many stationery items are on the list and which ones belong to one group. 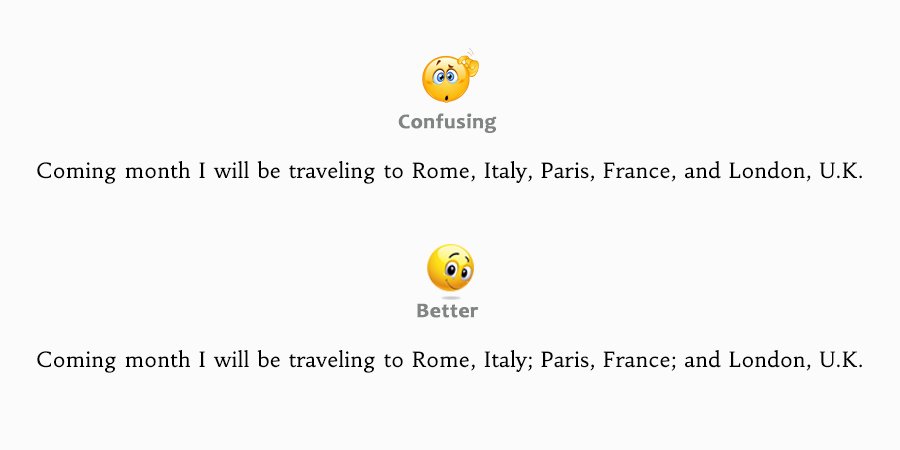 To link two independent clauses with a close relationship, such that the second sentence seems like a follow-up thought of the first.

Example: I went to the stationary shop today. I bought five different pens.

Note: As described in our comma rule article, if the independent clauses were joined by a coordinating conjunction (For, And, Nor, But, Or, Yet and So), a comma would have been used.

Doubt: Many question the use of semicolons when the sentences are complete by themselves.

One reason is to improve the sentence style since two short sentences sound abrupt and choppy. Another stronger reason is to emphasize the relation between your independent clauses, which a period cannot achieve.

Use a semicolon between two independent clauses when they are connected using transitional phrases/words.

Note: As described in the comma rule article, when some word/phrase is non-essential and breaks the sentence flow, a comma is used.

In a nutshell, use the semicolon for the following: